To Cumulus Networks Cumulus Networks
"
Userlevel 1
Currently we have both data and voice vlans configured on the switch ports, however the only IPs being distributed to a laptop and a VOIP phone are coming from the data vlan. They are both plugged into their own individual switch ports, however there will be situations (later) when the phone and laptop will be plugged into one another and then up to a switch port.
With that being said, we need for the laptop to pull a data IP and the VOIP phone to pull a voice IP in either situation.
Vlan1832 is for voice and vlan1800 is for data, the rest of the configs are below.
Thanks.

I passed the following conversion on to someone, and I believe he confirmed that it worked.

Just be aware that even though you're configuring the voice VLAN, it's not going to operate in the same manner as Cisco's voice VLAN. The above config assumes that the phone's voice traffic is tagged with VLAN 1400.

If you do give it a try, please post up the results so I have multiple data points on it working or not.

auto bridge
iface bridge
bridge_ageing 28800
bridge-mcsnoop 1
bridge-vlan-aware yes
bridge-ports glob swp1-48 bond0
bridge-vids 1832 1800
bridge-pvid 1800
bridge-stp on
J
Userlevel 3
The bridge-vids is roughly the same as "switchport trunk allowed", while the bridge-access is the same as "switchport access vlan". These should not work together. The "switchport voice vlan" command actually creates what cisco documents as a “multi-VLAN access port”. So since this is a single-VLAN trunk (voice VLAN with untagged), the configuration would be:
Looking under the hood though, the "voice-vlan" is basically just a mechanism used by CDP to dynamically configure a VLAN for the 3-port switch, inside a cisco phone, to use for the voice traffic. By tagging the voice traffic, the phone can use the 802.1p bits to mark the traffic with a CoS=5. The traffic traversing the phone's "computer" port will be sent to the switch untagged. It also configures the PoE settings.

The PoE part via LLDP will work on a PoE-capable switch. The advertisement of the voice-vlan via LLDP or CDP is being discussed in another thread about LLDP-MED:
That should work.
W
the "configure med policy application voice tagged vlan 1832" by itself does not continuously update the LLDP_Multicast network policy, it seems LLDP falls back to the default value. we tested by swapping the IP-PHONE swp and reloading, it was a hit-and-miss game.
This is what seems to work for us now,
cat /etc/lldpd.conf 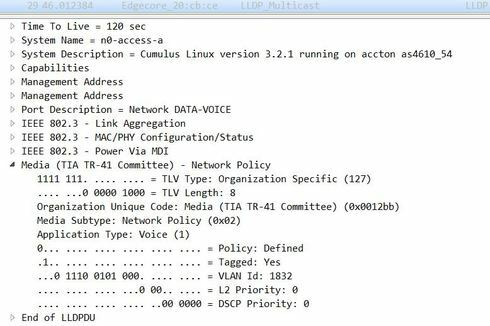 "
Userlevel 1
It seems as though the voice vlan worked for a brief period of time, but then converted back to pulling a data vlan IP. We've noticed that after shutting down the port for approximately 2 minutes and reenabling it, it would default back to the data vlan.
The "systemctl restart lldpd" command would immediately issue it a voice IP, but bouncing the switch port would trigger it back over to the data side.
There seems to be some sort of timer that is expiring.
Any thoughts?
Thanks.
E
LLDP PDUs have a time to live (as seen in the Wireshark screenshot above) and need to be sent continuously (usually once every minute) to not expire. You could check via Wireshark if they are sent often enough or not.
http://www.fg-networking.de