I have two VX VMs in a topology. Followed the instructions in http://docs.cumulusnetworks.com/display/VX/Using+GNS3+with+QEMU+and+KVM+Virtual+Machines and I configured swp1-3 on both sides, then "ifup"d them. They do show as up and running in the OS:
So, then I tried to connect them with a link, but I get an error and the QEMU VMs stop: 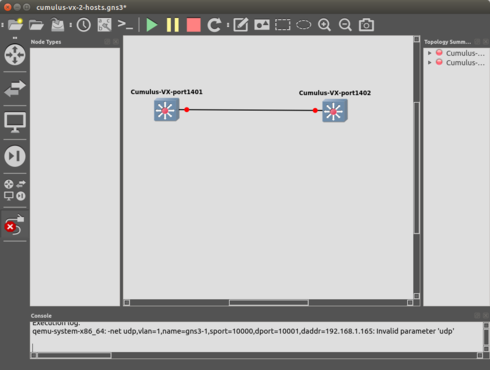 The whole text from the GNS3 console is:


Anyone have any ideas about this, or should I post this on the GNS3 forums? (not sure who to turn to with this one...)

Thinking about the way I used to connect my GNS3 labs up to my host PC (the one running GNS3), I thought, hmmm... What about using a "tap" connection? So, I created a "tuntap" interface on my host server (I'm running GNS3 1.4b3 in split client/server mode; the GNS3 server is running on a Dell server in my lab that has plenty of CPU and RAM) via the following commands (all executed as the 'gns3user' user, who is the user who I'm running the GNS3 server under):
This gave me an up-and-running tap0 interface on the server that I could use in GNS3. I then dragged out the "Host" icon from the GNS3 sidebar (in the "End Devices" section) onto my topology, and connected the 1st VX VM's "Ethernet0" interface (corresponds to the eth0 interface in the VM) up to the Host's "nio_tap:tap0" interface. After this was done, my topology looked like this: 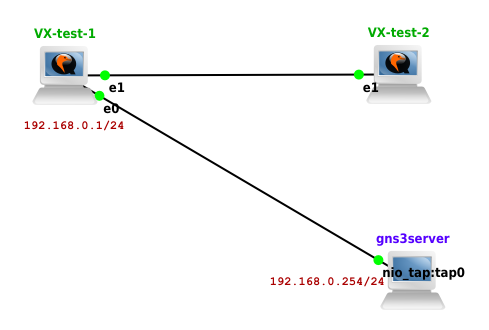 Then I fired up the "VX-test-1" VM, and using the serial connection (right-click icon, choose "Console" - to enable this see my comments at https://community.cumulusnetworks.com/cumulus/topics/enable ) I logged in and configured the eth0 IP address via /etc/network/interfaces then did an "sudo ifreload -a" to implement the change. I verified I had connectivity by pinging the link partner IP from both sides, and then just for fun, I got LLDP running on my GNS3 server (which is helpfully named 'gns3server'), verified that I saw the VX switch from the server, and tried SSH, which worked:
Sweet victory was mine at last!

Alas, though, it was short-lived... If one is good, *two* is better, right? So I modified my topology thusly: 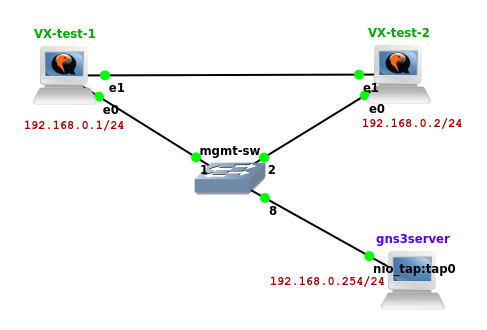 Went in and configured the VX-test-2's eth0 IP, and then verified pings and LLDP again:
Looks good, right? So I try a SSH again:
Needless to say, I haz a sad... Not sure why this isn't working, but tomorrow's another day... At least some progress is being made

The VX "Using GNS3 with QEMU and KVM Virtual Machines" doc currently specifies in step 4 to "Check the 'Use the legacy networking mode' check box." This is mainly to allow SSH'ing to the VX box, which sadly is not set up for serial console access (this really should be enabled by default on VX - please!!) and so SSH is the only way in (not really, if you allow the QEMU console to be displayed, but for most folks this would be turned off.) However, due to the way GNS3 utilizes QEMU "legacy mode" and the history of GNS3 / QEMU integration, this causes the formation of incorrect syntax when forming the inter-VM links in GNS3.

To allow SSH access from the host, the legacy QEMU construct of:
is tied to the VX eth0 interface via the "vlan=0" parameter, which is also set on the QEMU NIC:
The "vlan=0" parameter implemented a virtual ethernet hub, in which any other -net interface with "vlan=0" was virtually connected to. So, the "-net user,..." line above allows the forwarding of traffic sent to the host TCP port 1401 to the VX NIC with the "vlan=0" tag, namely eth0, TCP port 22 (SSH.). Also, the "net=" in that line declares a IP subnet to which QEMU will provide DHCP service to, which also causes the eth0 NIC in VX to get an IP address (typically 192.168.0.15 from what I've seen.) And so, this is why (for this example) if one types "ssh -p 1401 cumulus@localhost" you get a SSH connection to the VX host, which it sees as coming in to 192.168.0.15:22, namely SSH on eth0.

The problem becomes that up until now, GNS3 in "legacy mode" would form the inter-switch connection in this format:
which following the "vlan=" rule above, would be connected to the interface having "vlan=1", namely in this case swp1:
The problem being, as we've found out, that mainline QEMU never had a "-net udp,..." construct.

OK. But what if we UNcheck "legacy mode"?

Well, that makes the inter-switch links work! Because they are in a new format, namely:
Now they are tied together by a "netdev= / id=" keyname pairing, not a "vlan=" common parameter. And QEMU since v1.1 has supported UDP tunneling via the "udp=..." attribute in "-netdev socket,..." (and I think everyone now is [or should be] running QEMU 1.2 or better with their QEMU distro packages.)

HOWEVER - sadly, this breaks the magic SSH port forwarding, because of one little thing -- we would need a "netdev=
W
Userlevel 2
Just got the definitive word from the main GNS3 dev (Jeremy G.) --

[1] It only worked if you patched the official QEMU source with a GNS3-curated patch set that supported the "-net udp,..." syntax and then built a custom QEMU; see http://www.braindeadprojects.com/blog/what/gns3-and-gentoo-fixing-qemu-networking/ for historical details.
W
Userlevel 2
Great, thanks Scott!
S
Userlevel 5
Will,

I have pinged the team internally and hopefully it will spark something. We will keep you updated. Thanks!
W
Userlevel 2
Jeremy wrote this comment in the GH issue:


Looks like recent version of Qemu do not understand the -udp parameter anymore. Need to investigate this more.

Alternatively, you can use virtio-net-pci network adapter type instead and not use the "legacy networking mode"

Is there a way we could work with the appropriate resource there at Cumulus to get the VX VM to allow SSH access without using "legacy networking mode"?
S
Userlevel 5
I did see that on the bug and he also marked it for the new release(1.4). Will keep eyes on it.
W
Userlevel 2
No, hadn't seen that... But note that the fellow in that post has the opposite problem of mine (new style QEMU "-netdev socket,..." command failing with udp error while mine seems to work...)

I see that Jeremy G. (main GNS3 dev) has labeled my GitHub issue #663 as "bug" and assigned it to himself, so let's see where that goes...
S
Userlevel 5
Will, have you seen this post?

https://community.gns3.com/ideas/1739
W
Userlevel 2
W
Userlevel 2
OK, now I'm confused... I see in the doc http://docs.cumulusnetworks.com/display/VX/Using+GNS3+with+QEMU+and+KVM+Virtual+Machines that under the section entitled "KVM/QEMU from the Command Line" that the "-net udp,..." syntax was used there... So I tried the exact syntax of the command given on the first example there (excepting changing the path to the .qcow2 disk image) and this is what I get:


Do I need some special version of QEMU that supports the "-net udp,..." syntax?
W
Userlevel 2
Opened issue on GNS3-gui issue tracker: https://github.com/GNS3/gns3-gui/issues/663

Userlevel 4
Keep this stuff coming, Will, this is great. And let me know if anything here needs to be updated in the docs (even if it means calling out a GNS3 issue). Thanks!
manager, documentation and community @ Cumulus Networks
S
Userlevel 5
Thanks for posting this and the update. Please Let me know what comes from the report with GNS3. I am actively interested in this flow.
W
Userlevel 2
In further testing, if I make the QEMU VM templates have "new style" network adapters (i.e., "Use the legacy networking mode" is UNchecked, and Type set to "virtio-net-pci") then when I form a link between the instantiated VMs from this template, the link does work (goes green and stays up) and I see that the relevant QEMU config line on the VMs is:
instead of the malformed:
I'm guessing this is a GNS3 bug, and will report it as such...