Userlevel 3
Cumulus Networks has written a number of demos to showcase Cumulus VX. One of these demos configures a large layer 2 MLAG environment. You can use this demo as is to explore MLAG networking with a Linux-based system. Then feel free to use it as a starting point to create your own virtual network environment that is specific to you own situation. These demos can be downloaded from the CumulusNetworks/cumulus-vx-vagrant GitHub repository.

The MLAG demo is in the vagrant/demos/mlag directory. It uses Vagrant with VirtualBox to create a large layer 2 network of 8 switches and 10 hosts. For simplicity, the whole configuration is contained in the single Vagrantfile. No other provisioning tools, such as Ansible, Puppet, or Chef, are used. 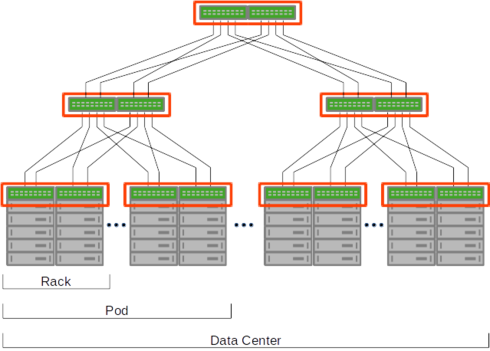 The Vagrantfile defines the properties of the virtual machines, such as the number of network interfaces, the amount of memory, as well as the connections, or "networks" in VirtualBox terminology, between the virtual machines. The Vagrantfile also provisions each virtual machine, loading whatever configuration is necessary. For the switches, this means creating an /etc/network/interfaces file and loading it. For the hosts, the bonding driver must be installed, loaded, and then the /etc/network/interfaces file is loaded.

NOTE: When running MLAG on a virtual machine, you must include the "--vm" option to clagd. Include this line with the other clagd configuration options on the peer link in /etc/network/interfaces:
To use this virtual environment, make sure that you have VirtualBox and Vagrant installed on your system. Then run:
This will spin up all 18 virtual machines. Vagrant does this serially, so be patient. You should make sure that you've got plenty of available memory, since each virtual machine takes about 192MB. You can check to make sure that the entire virtual network is up and running by executing the ServerSpec supplied with the demo. Make sure you've got ServerSpec installed on your system, and then run:
Once the VMs have been created, provisioned, and verified with ServerSpec, you can log into them with:
Where hostname is the name of the host or switch. The hosts are named:
Run some commands on the switches, such as:
On the hosts you can ping any of the other hosts:
Once you are done using your virtual MLAG environment, your can get rid of everything with:
After using the demo, try modifying it to include other features or to more closely match your environment. For example, you could place the L2/L3 boundary at the pod switches by using VRR and OSPF.